Dr. Jochen Reutter About the Origin of the Urtext Edition of Bartók’s Mikrokosmos

One can hardly overestimate the pedagogical and historical importance of Béla Bartók’s Mikrokosmos first published in 1940.

With its total of 153 pieces the work is not only an impressive collection of progressive piano pieces (thus its subtitle), but, as a compendium that has remained unique in its kind, also forms a comprehensive introduction to the music of the first half of the 20th century, both in terms of compositional technique and style – from the very fi rst piano lessons right up to concert repertoire.

While not being a piano method in the strict sense it nevertheless offers a wealth of illustrative material for many technical problems that has its own intrinsic artistic value. It is therefore not surprising that Mikrokosmos is regularly mentioned in the same breath as Bach’s Well-Tempered Clavier and Chopin’s Etudes which in a similar, but in each case very specifi c way both refl ect the aesthetic premises and pianistic demands of the 18th and 19th century.

In addition, Mikrokosmos combines more than any other of Bartók’s works various aspects of his comprehensive artistic, scientifi c, creative and pedagogic labour – and this without any impairment of compositional authenticity whatsoever.

Bartók is said to have referred already in his early years to Bach’s Well-Tempered Clavier as a ‘Mikrokosmos’. It is in this sense that one should probably also understand Bartók’s defi nition of his own Mikrokosmos as a series of pieces in all different styles to represent a small world.

This ‘Mikrokosmos’, which not only focuses on piano playing, also manifests itself in pieces in which Bartók integrates singing with piano accompaniment, also in his arrangements for four-hands piano on two instruments. 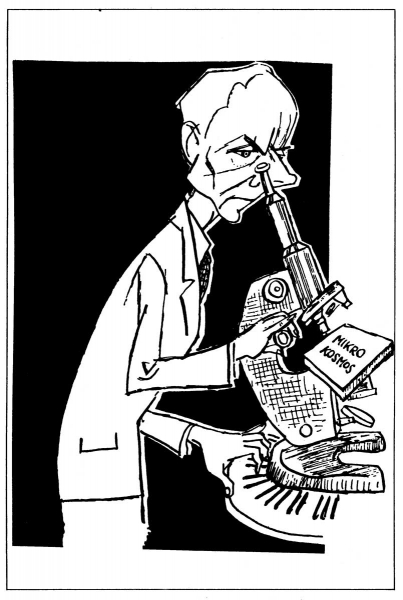 Bartóks son Péter wrote about his lessons with his father:

‘His teaching programme did not follow an accepted ‘piano school’ technique. At first I was to sing only.’ 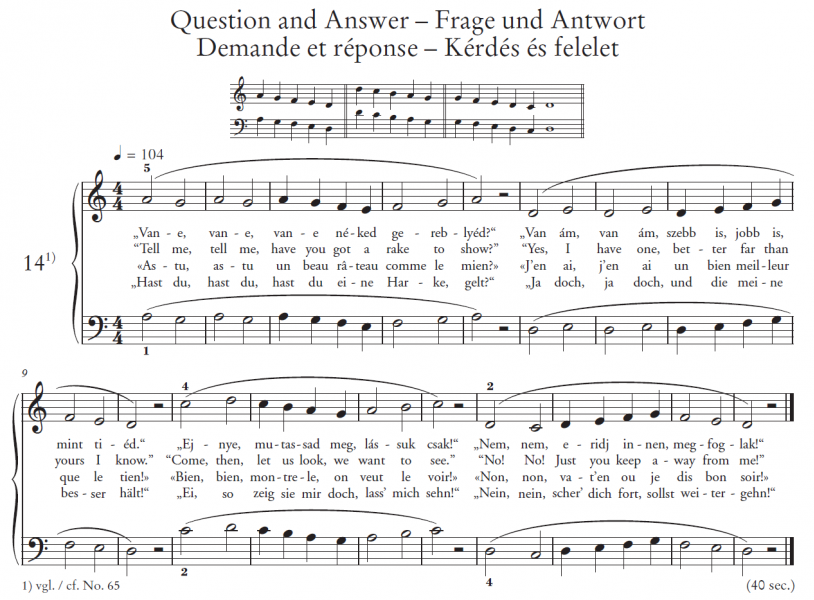 From Bartók’s comments on Mikrokosmos from 1944:
Sing and play the piece. Compare it to speech. In order to emphasize the ability of expression of music interrogatory and answering verses have been put to the respective sections of the melody. It is recommended that the piece be sung by two pupils (or two groups of pupils) alternatively before practising it.

In his compositional and pedagogical masterpiece Mikrokosmos Bartók embodies the essence of his piano oeuvre in concentrated form. He regarded the cycle as an introduction to the world of modern sonorities and as ‘a synthesis of musical and technical problems.’. Bartók arranged the pieces in ascending difficulty, from very simple children’s pieces to difficult concert pieces like the famous Ostinato.

‘My idea was to write piano pieces intended to lead the students from the very beginning and through the most important technical and musical problems of the first years, to a certain higher degree.’ 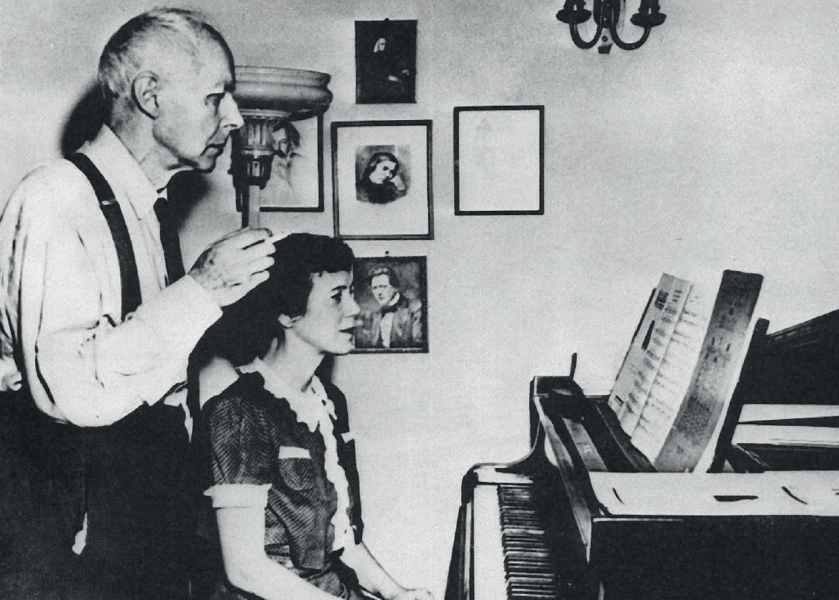 Bartók with his student Ann Chenee in his apartment in the 57th street in New York. © C. D. Hackett

In three books - as Bartók intended

The division of Mikrokosmos into six books, as presented by the original edition, was something that ran contrary to Bartók’s intentions. He expressly advocated a division in three volumes.

‘My idea is to have them published in
three volumes ... :
I. The easiest pieces
II. The less easier pieces
III. The more diffi culte [!] ones.’

For these reasons the new Wiener Urtext Edition in three volumes restores the composer’s original intention and combines respectively two books of the original edition in one volume. 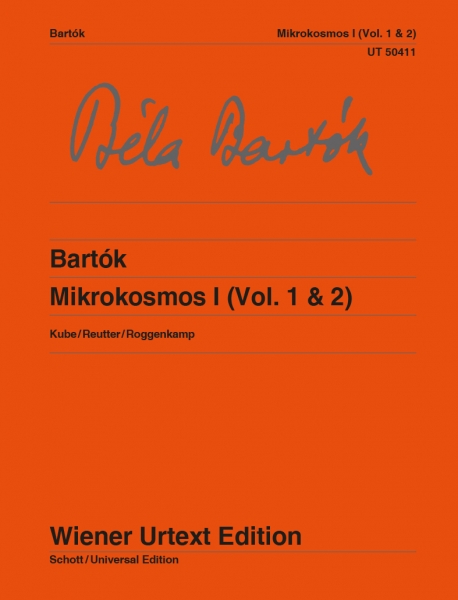 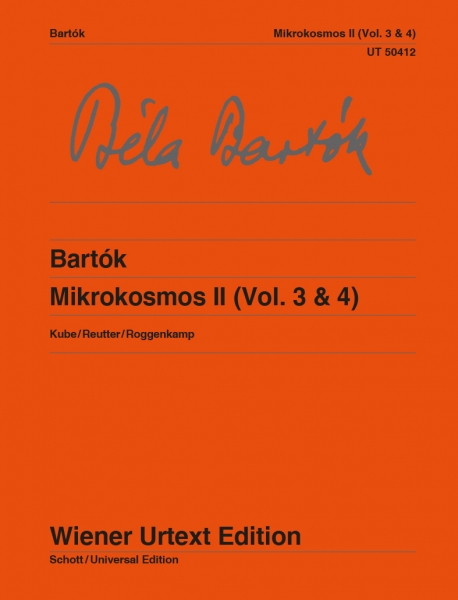 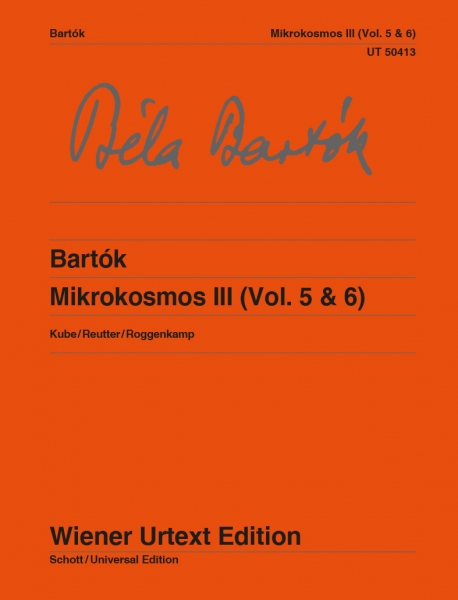 The new Wiener Urtext Edition is based on the text of the original edition and incorporates all amendments and corrections gathered from the critical comparison of the sources. Some of these hitherto unnoticed errors have survived until today. They are due, in part, to misreadings and misinterpretations by the engraver. We find for instance a frequently occurring fi ngering error: Bartók had the habit of separating tempo indications and metronome markings with a comma. If such a comma came close to a notehead, either above or below it, the engraver occasionally misread it as a fingering 1; this could happen particularly easily as Bartók wrote the figure 1 as a small stroke that looks very much like a comma (you cand find this in the piece "Thirds") 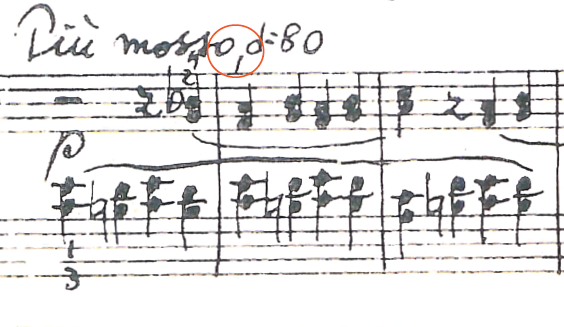 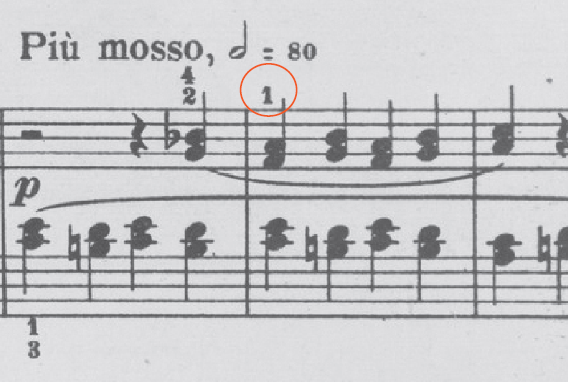 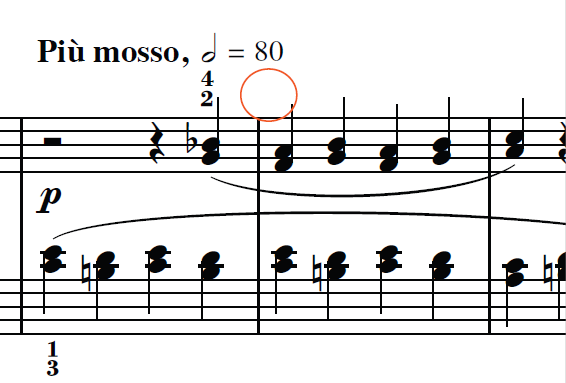 No. 71 (Thirds) is slightly longer in the special version for Péter Bartók than in the published version. Bartók here wrote additional crescendo marks as a dynamic preparation for the subsequent accents. 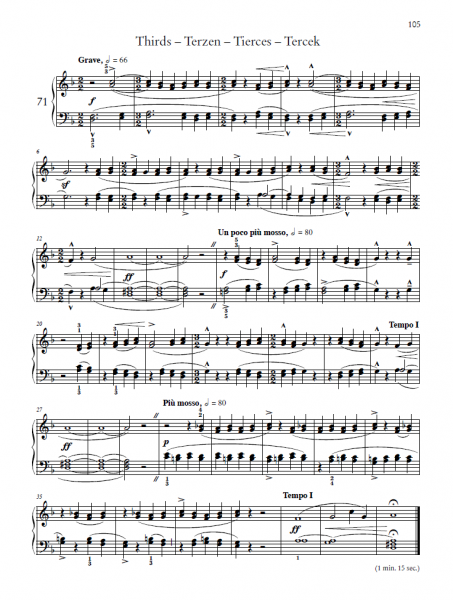 B II/4 is a so-called flageolet piece in which silently depressed chords are made to resonate as harmonics by playing fully sounding notes with the other hand. This produces fascinating echoing sonorities. Bartók featured this technique also in No. 102. Vol. II/4, which survied as a draft for Mikrokosmos, constitutes a second example of this technique.

Among the sources of the Mikrokosmos a partial diazocopy of the autograph master has survived, which Béla Bartók used for his son’s piano lesson. Th e pieces from this particular copy containing additional indications by Bartók are reproduced in the appendix of the corresponding volumes of the Wiener Urtext Edition, as here the piece 'Merriment' from Mikrokosmos Volume 2.

In the special version of No. 84 (Merriment) for his son Péter, Béla Bartók gives particular attention to the accurate depression and release of the right pedal and indicates this precisely with additional markings. Added caesura lines help the student with the interlaced phrasing of the two hands in bars 18–20, while a bracket before the final chord suggests a practical distribution of the hands. The letters below the last staff analyse the piece's formal structure. The student should not only play but also understand what he or she is playing.

In the context of pedagogical piano literature

Bartók dedicated two of his piano pieces from the Mikrokosmos to great composers of the past who also wrote piano pieces for teaching.

No. 79 – Hommage à J. S. B. – is dedicated to J. S. Bach who, with his Twoand Three-Part Inventions, created an excellent pedagogical work for posterity.

With No. 80 – Hommage à R. Sch. – Bartók honours Robert Schumann who wrote Album for the Young op. 68, an excellent collection of pieces for young players. 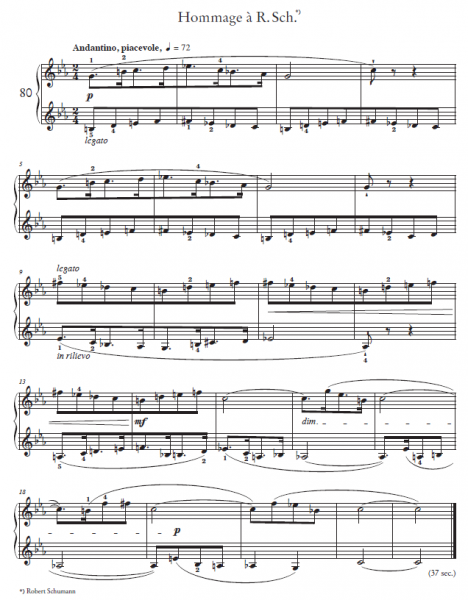 Bartók’s Mikrokosmos can justly be compared to Bach’s and Schumann’s pedagogical works. In his preface Bartók already refers to tried and tested teaching literature and suggests:

‘The fourth book should be combined with, for example, the easy pieces from J. S. Bach’s ‘Note Book for Anna Magdalena Bach’, the appropriate studies by Czerny, and so forth.’

The two short pieces B I/1 and 2 are exercises in free polyphonic playing. The second piece fluctuates between minor and major in a way that is typical for Bartók.

B II/1 (an early version of No. 63: Buzzing) is a kind of trill exercise but acquires a particular colour through the irridescent harmonies in the interval of a ninth. The division of the trill melody in small asymmetric phrases – a further characteristic feature of Bartók – requires hightened rhythmical attention towards the end.

In B II/2, after first introducing the musical material, Bartók develops small-scale clusters, a technique the composers applies also in other pieces of Mikrokosmos in ever-changing variations.

The particular feature of the early version of No. 147 is that it lacks the octave doublings in both hands that appear in the published version. This makes the piece considerably easier to play without however losing its musical effect. Incidentally, Bartók never discarded this version in his manuscripts for Mikrokosmos.